Alaskan Cruise -- A Day in Vancouver

Our Alaskan cruise started in Vancouver so I had the distinct pleasure of visiting Vancouver, BC as a part of our Alaskan cruise. I am sorry it was only a single day for I found it to be a most friendly place to visit. I can honestly say I did not meet a single rude or unpleasant person the entire time I was there. From the customs agent to the busboy all were kind and considerate.

We live in the northern quadrant of the southeastern United States, the aviation armpit of America so we left awfully early in the morning flying west and gaining time along the way. We arrived in Vancouver before lunch local time.

We enjoy doing a bus tour of a new city to gain a quick overview. We especially enjoy the ones where they sell a 24 or 48 pass and allow you to hop on or off to see some sights. Sure enough they had one of those. So we left our bags at the hotel we grabbed a quick lunch at a local pub, taste tested a couple local brews, bought our tickets and hopped on board. It was early season so we actually got a two day pass for the price of a single day.

The first thing of interest we saw was Vancouver beach. There were so many people there. It looked like Daytona at spring break. I learned later that particular day was the first glorious spring day that season and the crowds flocked to the beach.

My wife mentioned she wanted to get off the bus and see something in Stanley Park without fully disclosing why she wanted to do that. a bit later I learned why and you will to if you keep reading. The ride to the park was nice. The park itself was very well maintained and the flush new growth of early spring flowers was breath taking. 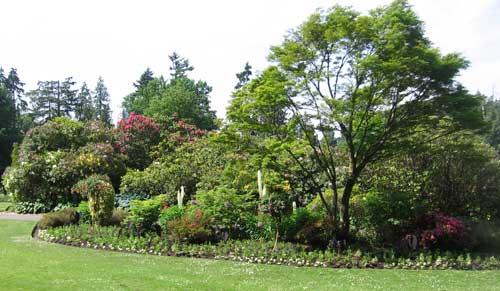 As we got to a slightly more remote area she said, 'let's get off at the next stop for a bit. I want to see the squirrels.' Squirrels; heck we have tree rats back home. But I was mellow after the brews so I said okay.

After we were off the bus she pulled a bag of peanuts from her purse and said, 'Let's feed the squirrels.' I was questioning her sanity at this point in time. Hauling peanuts 3000 miles to feed tree rats was going a little far.

She had done some online reading that I had not and she knew something I did not. Stanley Park is home to the black squirrel, something neither of us had ever seen. I have since learned that there are a few locations in America that do have them but they do not live anywhere close to us. Here is what one looks like. 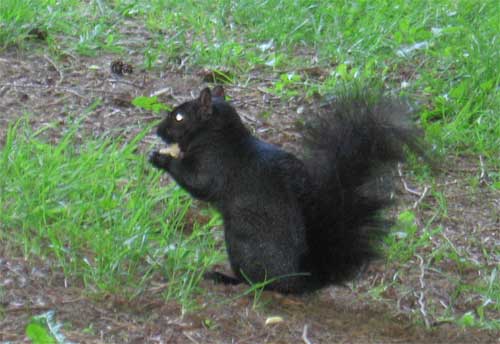 After filling this little rascal and a couple of his friends with peanuts we caught the bus and resumed the tour. We hopped off and on the bus a few times to see some of the beauty of Vancouver. We even walked a bit. At about 6 PM local time I ran out of energy ate something at the food court in the basement of the complex and crashed.

The next morning we ate the most expensive breakfast, (included with the room), I have ever eaten. The food and the service were both impeccable but I will tell you a 20% tip on the gross check was more than the two of us usually spend for the entire breakfast meal with tip. Our server was worth the tip. The food was also surprising good for a hotel.

Bottom line: Vancouver you may see me again someday.

A Cruise -- The perfect Vacation
My wife and I agree about many things and there are a few things we disagree about; but when it comes to the ultimate vacation bargain we absolutely a................

Alaskan Cruise -- The way to see it
You probably already know I am sold on cruises. I just consider them the ultimate vacation bargain in the price value relationship category.................

Alaskan Cruise Ketchikan
We left Vancouver, BC late in the afternoon, traveled overnight and spent a full leisurely day at sea traveling about 800 nautical miles along the pat................

Alaskan Cruise North to Juneau
Juneau was probably the most commercialized port of call on this trip. The attractions handbook provided by the cruise company listed 44 attractions ................

Alaskan Cruise Glacier Bay National Park
We arrived in Glacier Bay the next morning and would spend the next 9 hours looking at ice cubes. Sorry, I could not resist. As you travel up the bay ................

Alaskan Cruise--College Fjord Anchorage and beyond
We were done with Glacier Bay in the mid afternoon and started the long haul towards Whittier which is the port for Anchorage with a small side trip t................

Alaskan Cruise -- Denali
We left the private lodge and moved on to Denali via motor coach. This establishment was also owned by the cruise line but was better located; a litt................

Alaskan Cruise Anchorage and home
Once we checked out we were ready to find some food. I wanted a real breakfast and I wanted real food. After asking a few people we found the perfect................