Kentucky -- A hard Day on the Bourbon Trail Part 1

Kentucky Bourbon Trail┬«  is a registered trademark of the Kentucky Distillers' Association.

It is really strange how sometimes you can live somewhere forever and never see the local sites that people drive or fly for miles to see. Such is the case for a Kentuckian who has never done all or part of the Bourbon Trail. Whether you live here or just visiting, some part of the trail should be on your must do list.

What is the Bourbon?
Kentucky is well known for its pretty horses, fast women and great bourbon. Or is that fast horses and pretty women? Either way the great bourbon is part is correct. The stuff was invented here in Georgetown, Kentucky in the year 1789 by Elijah Craig, a Baptist preacher. Reputedly the first batches were made using water from the Royal Spring which to this day still provides a good part of the Georgetown water supply.

A subsidiary of the Heaven Hill Distillery group has even honored the old rascal by naming their 18 year aged, limited edition, single barrel bourbon after him.

Bourbon starts out as raw, clear, grain alcohol; pretty nasty tasting stuff. It is the aging process in charred white oak barrels for a period of time that gives it the distinctive flavor that defines good bourbon. Due to temperature differences and locations within the storage warehouse a lot of barrels from the same batch and placed into storage within minutes of each other may not mature at the same time. The longer it ages, the more distinctive the flavor and the smoother it becomes.

Even in the old days when a wood fired still like this one was used the distillers knew the secret as shown in the second picture, a reproduction of an old distillery store display. Note the charred barrel in image one and the price difference in image 2. 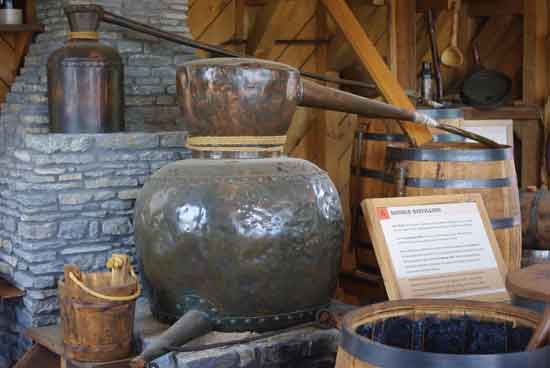 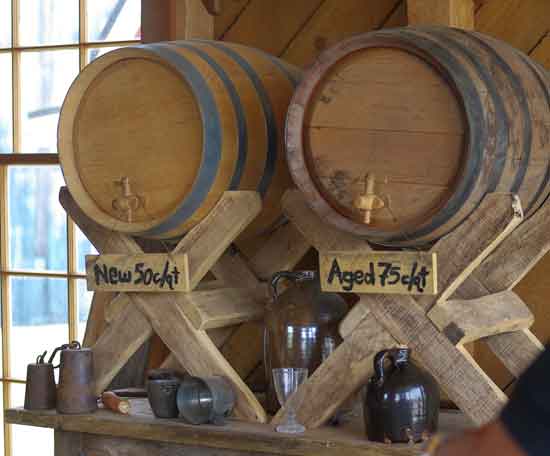 What is the Bourbon Trail?
Briefly it is free tours of 6 of the area's distilleries. Some offer extended tours by reservation and some offer additional paid options. Most offer limited free tastings and most sell their product in factory stores. Rather than repeat what already exists I will refer you to the official site for the Kentucky Bourbon Trail┬« for additional reading. Be sure to get a passport at your first stop and have it stamped at each location to qualify for your free tee shirt if you complete the tour.

All six of the distilleries are located in an out of shape rectangle with Louisville (I65, I64), Lexington (I75, I64), Lebanon and Elizabethtown (I65) representing the four corners. For folks coming from the west, east or north Louisville (looie ville) or Lexington are the natural beginning, termination or breakpoints as all locations are an easy drive from either of them. Three of them are located very close to the historical city of Versailles (ver-sales).

The tour can be completed in one frantic day but is best enjoyed when at least 2 days are invested with a little time left over to enjoy some of the other natural beauty the Central Kentucky area offers. A driving tour of the area horse farms should not be skipped if this is your first or only visit to Kentucky. We will visit that topic in another article.

Be sure to read the second part of this article, Kentucky - A hard Day on the Bourbon Trail Part 2

Kentucky -- A hard Day on the Bourbon Trail Part 2
I want to mention that the tour of the Maker's Mark Distillery which is just a little more off the beaten path than some of the others is the one tour................

The Big Apple -- New York City
The big apple has for many years been one of the number one tourist destination spot in the world for tourist. New York City has been a mecca for cult................

Las Vegas---- Is it the right trip for you?
Las Vegas has for many decades been one of the top designations to visit around the world for vacationers. As it's famously known as ōSin Cityö, Las V................